Sambhar Powder on a snowy day....

On Monday, 2nd Feb, we woke up to lots & lots of snow. It was beautifully white everywhere and all three of us couldn't budge from the window, taking in the scenery, well it was just the parking lot that we could see but it was beautiful nevertheless. Trees laden with snow, all the vehicles covered with snow (little S was trying hard to recognise which one was our car!), everything looked spotlessly white! 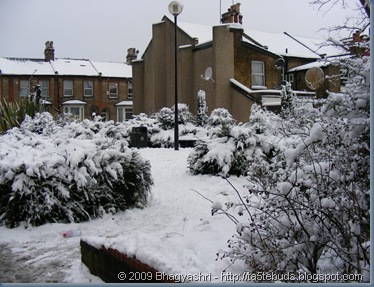 As we turned our attention to the real world, we came to know that there was no transport. The bus service was pulled out the previous night itself. Even the tube lines were not an option with all of them suspended or at least part suspended. So GM was 'forced' to work from home. I say forced because we don't really like that option and its mainly because of S. When Papa is at home he is supposed to be paying attention exclusively to S, he cant be doing anything else. So it gets very difficult for him to get his work done and even more difficult for me to hold S back and keep her engaged.

But Monday was a little different, we were glad that GM was at home, even though working. The work was light so he could play with S while working and I got some much needed free time. And how did I utilise it? I cooked away to glory in the kitchen :) There was Gajar ka Halwa (Finally updated the post with a pic)!, Wada-Pav (A must in the given weather, I say) with the famous Pav from Jugalbandi (I am cooking so much from them theses days that my posts seem to be incomplete without a mention!) & Pulao for lunch (recipe to follow..). But the most important one that I could make on that day was the Sambhar Powder. This was due for such a long time now, that we had actually forgotten the taste of the real Sambhar! The store bought powders do no come anywhere close to the home made one!

Now for some background on the Sambhar powder and Sambhar itself.

It is said that no two persons' Sambhar taste the same.

Said by people who have had a chance to sample Sambhar from more than 2-3 sources excluding the restaurants of course! BTW if you notice, the above saying is true for the restaurants too. I have never seen the taste of the Sambhar getting repeated in different restaurants!

My association with home made Sambhar dates back to the time I stayed with N & her family. Manni used to make the yummiest Sambhar I have ever tasted till today. But even as I am typing this out, I can see N's younger sister shaking her head and saying that their granny, Manni's mother, makes it better!  Manni made the Sambhar exactly the way her mother used to make, but it seems, it never turned out to be the same. She then thought it might be the difference in the basic Sambhar powder itself. So she called her mother home, and made it  under her supervision. I know, I was there to see it :) That afternoon Granny made the Sambhar and everyone said it was great, even N's sister. But the next day when Manni made the Sambhar using the same spice mix and the same procedure, it turned out, well a little different, the best in my opinion, but still different. How do you explain that?

Anyway, since I liked it Manni's way, I took down the proportion for the spice mix and observed how she made the Sambhar. Armed with this knowledge I came back home and impressed my Mom by making the Sambhar powder all by myself (I was still in college then) and subsequently the Sambhar too. Everyone liked it so much that I was praised in front of each & every person who happened to visit us for the next month or two, even the house maid!

But I was not happy because it was not at all like Manni's! It was good but not the same thing. Till date I have not been able to match the same taste, even though everyone including GM love the Sambhar that I make. I keep trying to make variations so as to achieve that taste but the trials are still on.

So here it is then, the Sambhar powder that I am raving about so much. I am giving the proportions exactly as I had it written down from Manni. It starts with 5 bowls of coriander seeds. Now the bowl can be anything from a teaspoon to a cup, it only gives the proportion, adjust according to the quantity that you would like to make. I always take the quantity of the Coriander seeds as the base and adjust the other ingredients accordingly. 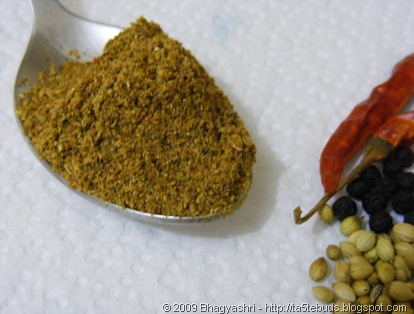 Note 1: Since I can never be sure how hot the chillies are as I don't know the variety I am getting in the packets, I always take a nominal quantity, say 8-10 chillies, for 5 bowls of Coriander seeds. I then add the required red chilli powder while making the Sambhar to adjust the taste. 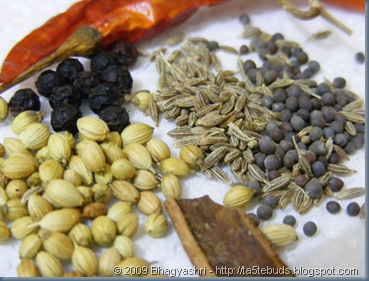 Dry roast each item separately, allow to cool and then grind to a fine powder, separately again, except for the Turmeric and Asafoetida. Here is a 'roasting guide' for each item.

Coriander seeds: Roast them on a low-medium flame as they tend to get burned very easily. Once roasted, the seeds let out a nice aroma and the colour changes to light brown.

Cumin seeds: Same as above but the flame has to be lower.

Black Peppercorns: The change in the appearance after getting roasted is not very clear and there is no aroma as such. They can be roasted on a med-high flame for about 2-3 min.

Mustard seeds: Roast them on medium heat. They change colour and for once its totally the opposite effect. They go from a darker shade to a lighter colour and also start popping, just like they do when added in the oil for tempering. And they smell like gun powder, I mean the one that is filled into crackers! I am always reminded of Diwali night and fire crackers when I am roasting mustard seeds :)

Fenugreek Seeds: The lowest flame. They change colour quite fast and get burned in no time. Keep an eye for the first signs of colour change, wait for about 10-15 seconds and remove from fire.

Split Chickpea: Can be done on a medium high flame. Changes colour and lets out an aroma as well. Take care not to burn it.

Split Blackgram: To be done on a medium low flame, since they take lesser time than Chickpea.

Cinnamon: Break the pieces into smaller bits and roast them. Again there is no significant change in the appearance, but it does let out a bit of an aroma. Roast on medium flame for about 2-3 min.

Curry Leaves: This looks to be easiest but in reality its the toughest. If the roasting is not done properly, that is if the leaves have not dried completely, they will not grind well. Roast them on medium heat until you hear each leaf crackling when you press down with a spoon. In case it still doesn't grind to a fine powder, sieve the ground mixture and discard the coarse part.

Dried Red Chillies: I recommend that this be done as the last thing before you shut the kitchen door and relax in the living room for at least 15-20 min, with the kitchen window open & the exhaust running on full blast! But again, this need not be roasted for a very long time, just 2-3 min on medium low flame should do. 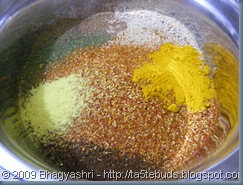 As you grind each item, combine the powders in a large bowl. Add the Turmeric powder and the Asafoetida and mix well.

Store in a dry container and use for Sambhar, Bisibele Bhaat, vegetable preparations etc. 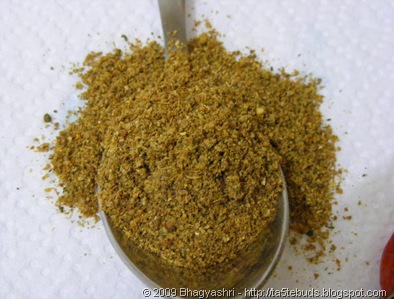 We did have fun in the snow, BTW. Little S enjoyed her first time in the snow even though her hands were aching from the cold in spite of wearing gloves and the rest of the 'gear'!