Eating out for little Shreya invariably means having Chilli Paneer. She is a die hard fan of the dish and no matter how spicy it might be she relishes it, without so much as a thought to the other food items on the table. She can actually eat ‘only’ Chilli Paneer as her lunch or dinner or even breakfast for that matter! Weekends are usually spent in one of the Indian restaurant here where we get good Chilli Paneer or otherwise convincing her that it is not possible to eat out at that same restaurant every week. In fact there was a time when we would order the dish for her, no matter which restaurant we went to. But she is very particular about the taste and soon tired of the bland and different Chilli Paneer at other places.

The only other solution was to make it at home, which I started doing since last year. If you are used to making the Indo-Chinese dishes at home, this is no different, its very simple really. But the lure of the restaurant Chilli Paneer is too much even for us sometimes!

The recipe here makes Dry Chilli Paneer, but it can be made into a gravy as well to go with rice or noodles. See notes for the variation.

This is on its way to Kid’s Delight – Restaurant Recreation being hosted by Versatile Vegetarian Kitchen, originally started by Srivalli at Spice your Life. 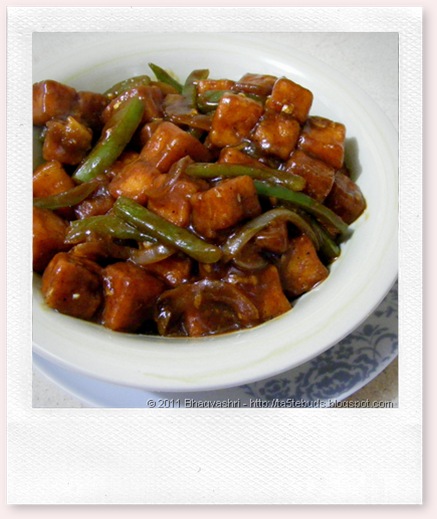 Mix together 2 tblsp Corn flour, plain flour & season with salt & pepper. Heat oil in a deep pan. Roll the Paneer cubes into the flour mixture and deep fry them till brown. There is no need to add water to make a batter as the moisture on the Paneer cubes is enough to hold the flour and this gives you crispy paneer pieces.

In a wok heat 1 tblsp oil, when hot fry the onion sliced. Add the slit chillies & ginger garlic paste and fry till the raw smell goes away.

Now add the pepper and fry for a couple of minutes.

Add the soy sauce and sauté some more. Season with salt & pepper, keeping in mind that the Soy Sauce is also salty.

Add about half a cup of water and let this come to boil.

Make a paste of 1 tblsp corn flour with a little water and add this to the gravy. Reduce the flame and keep stirring as it will start to thicken.

Add the tomato puree and ix well. Add the fried Paneer and mix well to coat. Heat through for a minute or two until the gravy reaches desired consistency and then turn off the heat.

Serve hot as a starter or if you go the gravy version it can be served as a side to Fried rice or noodles.

My Notes: This is as good as it can get. You can add some Spring Onion greens for garnish but I dont bother since I have to pick them out again for S!

If you want gravy instead of the dry version, add about 2 cups of water instead of half a cup and proceed in the same manner. Keep cooking till the gravy has thickened a bit but not too much and then switch off the heat and serve.

Posted by Bhagyashri at 14:51 0 comments

This month’s Indian Cooking Challenge was very simple, as in simple to make and a very simple dish too. But as they say the good things in life are always simple, this Dal too turned out to be very good.

Every region in India has its own version of the Dal. Tadka Dal in the north, Amthi in Maharashtra, Saaru in Karnataka, Sambhar in the South and so on. The Gujrati version is a bit sweeter and has a whole lot of flavours, that of Kokum, spices and all the vegetables that you can put in it.

As always, I made it at the last minute and decided there and then that it wont be the last time that I make it. This gives a good change from the normal version of Dal that we are used to.

The recipe is from the Book Sukham Ayu, written by Jigyasa Giri and Pratibha Jain. Thanks a lot for sharing the recipe with us. 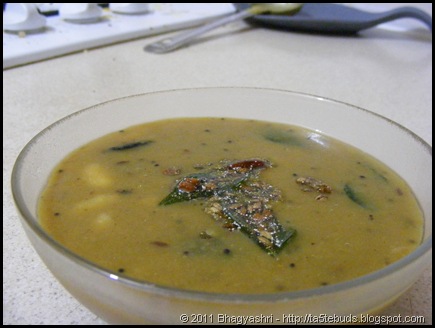 Cook the Dal along with turmeric till completely cooked and mushy. Mash the cooked Dal to give an almost smooth paste. Transfer it to a thick bottomed pan and bring to boil.

Add one cup of water along with all the ingredients listed for the dal except for the Garam Masala and Coriander leaves. Let the Dal simmer for about 10-15 minutes, keep stirring.

In a small kadai, prepare the tempering by heating the ghee and then spluttering the mustard seeds. Then add the fenugreek seeds. Reduce the heat and then add the rest of the ingredients for tempering.

Pour the tempering over the simmering Dal and mix well. Let it cook for 5 more minutes. Now add the Garam Masala and the coriander leaves and switch off the heat.

Serve hot as an accompaniment to Roti-Sabzi or with steamed rice for a comforting meal.

My Notes: Delicious Dal! S lapped it up with her Chapati & asked for more, and that in itself is a testimony. You can hardly expect a 3 yr old to appreciate something in a better way than that but then she went ahead and told me that the Dal was yummy!

Dont skip the Rock Salt, it really makes a huge difference to the taste.

I also didn't add any vegetables to the Dal. I would definitely like to try it with the vegetables next time, but this time we liked it just as it was.

Posted by Bhagyashri at 22:42 0 comments

Having missed a few of the recent Sweet Punch challenges, I was determined to make it this time. The challenge itself for the month of February helped a lot because it was very simple. The end result though was absolutely delicious and provides me with a great option for dessert whenever we might have guests over.

There was however only one hitch. Since I got down to make it only at the last minute, I didn't have enough time and could not find black currants, which are supposed to be the main ingredients – after all they were supposed to be currant slices! But as I said I didn't want to miss out on the challenge, so I went ahead and substituted the currants with something that was readily available – Sultanas. This tells you more about both of them. 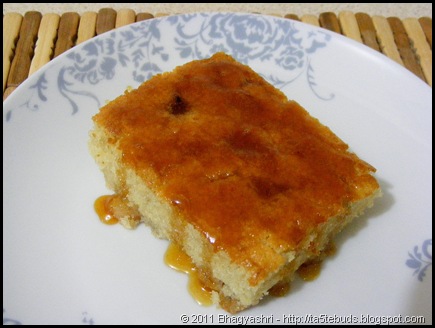 Mix together the apple juice, sultanas and the cinnamon stick in a saucepan and bring it to boil. Once it starts boiling, switch off the heat and let this mixture stand for a few hours. I left it for about 6-7 hours.

Once the waiting is over, strain the Sultanas, reserving the juice too. Press slightly on the Sultana to get the juice out. Pick out the cinnamon stick and add it to the reserved juice. Keep both the juice and the Sultanas aside.

Sift together the flour and the baking powder. Cream the butter and sugar together till it is pale yellow and fluffy. Add the beaten eggs and the vanilla extract and beat together. Now add the flour little by little and mix to get a smooth batter. Add half the reserved Sultanas and mix well. Spoon this mixture into the prepared tin and sprinkle the remaining Sultanas on the top.Bake in the pre heated oven for about 30 minutes until its cooked. 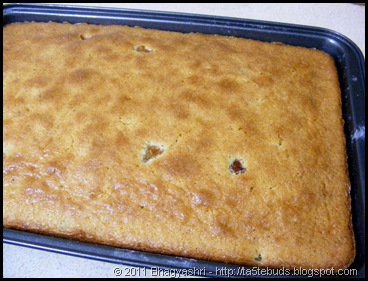 Take out of the oven and let it cool in the tin for 5 minutes before turning it out on to a wire rack.

While the cake is cooling a bit, bring the reserved apple juice along with the cinnamon stick to a boil and continue to heat on high till it reaches a syrupy consistency.

Once done, discard the cinnamon.

Serve a warm slice of the cake along with the apple syrup spooned over it. Enjoy!

My Notes: This was as simple as it could get. I could put together everything in under 15-20 minutes once the Sultanas were soaked and ready.

I did find the batter to be a little on the dry side and at one point had to add a little milk to get it going, but once the cake was done I thought that it could have done without it too.

The tangy syrup and the tangy Sultanas were a good contrast to the sweet cake. I felt that it would be great with some custard too, will try that combination next time!

Posted by Bhagyashri at 20:25 1 comments

I have been itching to get back to the blog but there hasn't been much cooking going on these days because of health issues. We are having this Khichadi almost every day, not that we mind.

I am recovering now and so thought that I will get back to the one resolution I made this year, well not exactly a resolution but a change in the lifestyle you could say. Up until now I had never fasted, weekly or otherwise even though it is quite common in the household back home. One major reason is that I tend to have low blood sugar which makes it difficult for me to go without eating anything for a long time. The other reason being that I dont really believe in fasting for religious purposes, especially when you compensate by having a lot of other goodies.

And goodies they definitely are! All food items that can be consumed during a fast are invariably delicious. You could say this was part of the reason I finally decided to give it a go and will be trying to fast once a week. I had been doing this for 4 weeks before I fell ill and had to take a break. But I am getting back to it now mainly because I need a change from the normal routine food and look forward to savour the fasting goodies!

I call this the subdued version of ‘Sabudana Wada’ for the simple reason that the ingredients are almost the same but its not fried. As mentioned in my post for Sabudana Wada, the trick to making good Sabudana Khichdi is also soaking it right. Thats half your work done. all that remains is assembling and cooking. 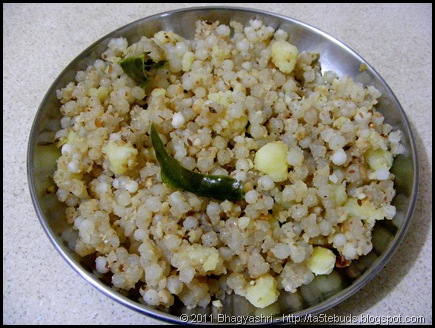 The first step of course is to soak the Sabudana. If you have the medium sized normal Sabudana you need to soak it for about 4-6 hours. If the the sabudana smaller in size, 20-30 minutes will be enough. Take the sabudana in a container and fill it with water so that the Sabudana is just immersed. Too much water will make it soggy while less water will mean dry sabudana.

Heat the oil in a kadai. Once hot, add the Cumin seeds and let them sizzle. Add the chillies and fry for a minute.

Now add the boiled potato pieces and mix well to coat them with the oil.

Mix the peanut powder and salt together with the soaked Sabudana. Add this mixture to the cooking potato and mix well. Reduce the flame, cover and cook for about 15-20 minutes, stirring in between to make sure it doesn't stick to the bottom of the kadai. Serve hot.

My Notes:  The usual method of making sabudana Khichdi is to mix the soaked sabudana, boiled potato, peanut powder, salt and green chilli paste together and then adding this mix to the oil & cumin seeds. But I find that this sometimes results in a soggy khichdi because of the over handling of the boiled potatoes. So I prefer to do it this way.

Also you can use Ghee instead of oil for the tempering and sprinkle some grated coconut on the khichadi.

Posted by Bhagyashri at 19:33 0 comments