Attending traditional kannada (North Karnataka) weddings was one of the things we enjoyed a lot about our annual trips to the village during the summer vacation. The celebrations, meeting the relatives and most importantly the food.

But at the same time there was one item we always looked forward to and that was the sweet. No, not the dessert but the sweet which was a part of the main meal and would be served between any two of the above mentioned rice varieties.

The sequence would go something like this – A full adorned thali
(or rather Banana Leaf) and the first thing to be had was the payasa or kheer. This would be followed by some rice, cooked lentils, a spoon of ghee (clarified butter) and a serving of Saaru (Sambhar) in a Donne (bowls made of dried …). After this would come either the masale bhaat or the chitranna. Followed by the star of the meal – the sweet,  mostly one of the following

While brother D, would eagerly wait for this course to arrive, I was happy licking away the payasa/kheer from the first serving. Not any payasa, but only if it was Godhi kuttida payasa, kheer made from broken wheat. The only sad part was that since the kheer was a part of naivedya, it was usually served in small quantities and unlike other items, we were not asked for a second helping either.

This kheer was and still is my favourite. I had promised myself that if I do get married in the village (which didn't happen BTW), I would definitely have this on the menu, not just as a Naivedya but as the main dish!

The traditional method to make it involves soaking the wheat to soften it a little, drying it and then ‘beating’ it to ‘break’ it coarsely using a large mortar & pestle, but wooden ones and not metal. The metal being heavier breaks the wheat into pieces while the wooden one being a little lighter, removes the husk without breaking the wheat into pieces and achieves smaller grain like consistency of the wheat. Also my mom tells me that the wheat used is a different variety, I cant recollect the name though.

Nowadays people have started making this in the mixer/grinder but the results definitely vary. I have taken the modern adaptation a step further and make this with the ‘Lapsi’ wheat available in the store. While this gives the payasa a very ‘Dalia’ like taste, this is the closest I can get to Godhi Kuttida Payasa, sitting here in London. 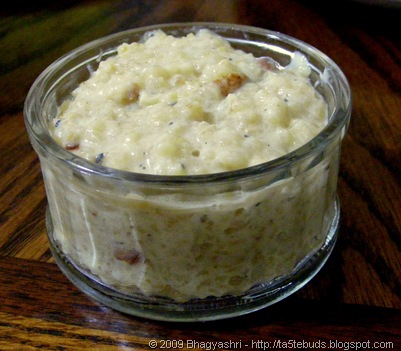 Cook the broken wheat with 1 cup of water in a pressure cooked for about 2-3 whistles, depending upon the type of the cooker. The idea is to cook the wheat without turning it into a mush.

Transfer the cooked wheat to a deep pan, add milk and bring to boil. Add the grated Jaggery & Cardamom powder and  mix well.

Cook on medium flame while stirring frequently until the milk reduces a bit.

Add the nuts and continue to cook till you get the desired consistency which ideally should be like a thick paste.

Serve warm as a dessert or as part of a meal and don't forget the ghee.

Apart from being delicious, this makes a very good Naivedya & is specially made during weddings (as mentioned above). 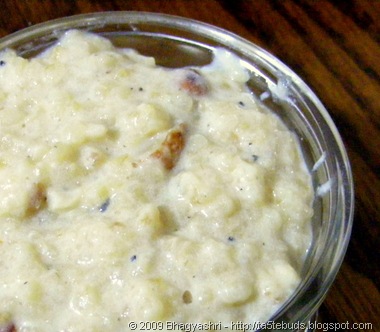 This goes to Srivalli’s Mithai Mela which celebrates two years of her blogging at Cooking 4 all seasons.