Think Spice is an event which was conceived by Sunita of Sunita’s World. The event has been going strong for more than 2 years, having explored a number of wonderful spices, some of which I hadnt heard about, I must admit. Having travelled all over the blogosphere, Think Spice is making a halt at Taste Buds for the month of February. 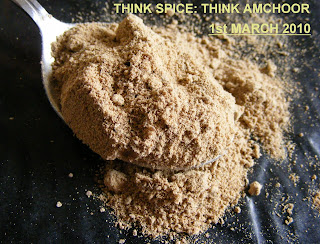 Amchoor has been one of my favourite spices but off late I have noticed that the usage of this tangy spice has decreased in my kitchen. So with an aim to rediscover Amchoor I have chosen it as the star for this month’s Think Spice event, which will be hosted here on Taste Buds.

The name of this spice comes from Aam (Mango in Hindi) and choor meaning powder. Amchoor is a fruity spice with a tart flavour, made from dried unripe mangoes. To make amchoor, early-season mangoes are harvested while still green and unripe. The green mangoes are then peeled, thinly sliced, and sun-dried. The dried slices, which are light brown and resemble strips of woody bark, can be purchased whole and ground by the individual at home, but the majority of the slices processed in this way are ground into fine powder and sold as ready-made amchoor. (source: wisegeek)

Amchoor is a predominant flavoring agent in north Indian cookery, used in a wide range of dishes including Sabzi/Bhaji (Vegetable preparations), soups, snacks etc. to provide a slightly sour flavour.

Here are the guidelines for the event.

The round up will posted in the first week of March.

So there you are then. Get cooking with Amchoor and get creative as you do so!

PS: You still have one more day to send in your entries for Think Spice: Think Vanilla for the month of January, hosted at Snacksgiving.