Its blog hop time again and this time I was paired with Kaveri whose blog Palakkad Chamayal, as the name suggests, showcases the Palakkad cuisine. One of those delicious sounding dishes would have been my natural choice but for the fact that I did not have any coconut at home. That is a problem you face if you end up making it at the last minute. I tried to look for a Palakkad dish which doesnt use coconut or a dish in which I could have cheated and left out the coconut, but I soon realised that coconut must be the essence of Palakkad cooking as none of the dishes sounded right without it!

So finally I had to settle for another South Indian cuisine, which is very intriguing for me because of the spices involved. Chettinad cuisine is well know for the hot and spicy food and a combination of that with Potatoes was an instant winner for me. The ‘chettinad’ part also reminded me of an incident some 5 years agao when GM & I had gone out for lunch and had ordered Chettinad Paneer, in spite of being warned off by the waiter that it was going to be very spicy. We had brushed off the waiter’s concern saying, we liked spicy! But when the dish was served both of us had tears in our eyes because it was too hot for us to handle. Since then we have been told that Chettinad cuisine is not only about being spicy & hot but being spicy in the right way so that the dish is not overpowered. I am sure the restaurant had taken the ‘spiciness too seriously and so had always wanted to try out something somewhere else. what better way to sample it than make it yourself?

Another thing that was pleasantly surprising was the minimal amount of ingredients involved. I had always thought that there would be a long list of spices to achieve that chettinad taste but it seems that the peppercorns do all the work here. 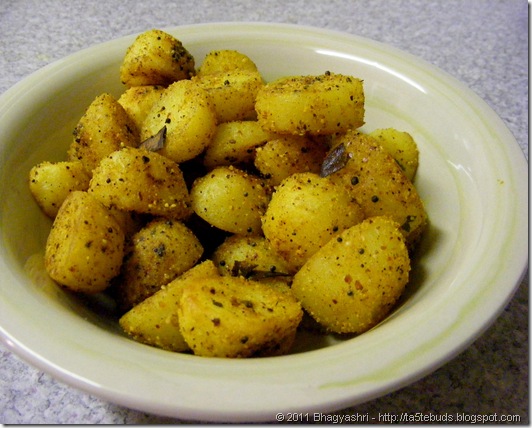 Boil & peel the baby potatoes and keep aside. Dry roast the Urad Dal, red chillies and Peppercorns and grind to get a powder.

Heat the oil in a pan and add the mustard seeds. As they start spluttering, add the curry leaves, hing and turmeric powder.

Add the boiled potatoes to this and toss/sauté for about 4-5 minutes. Now add the ground spices along with salt to taste. Mix well and cook on a medium flame till the potatoes start to brown and turn slightly crisp from the outside.

Serve with Chapatis or as a side for rice.

My Notes: This seemed like a proper Chettinad dish. It was spicy but at the same time delicious. Potato being a favourite was an added advantage.

I am now encouraged to try other Chettinad dishes and will be on the look out for some recipes.