I am writing this straight from Bollywoodalaya, which translates to 'Abode of Bollywood'. Bombay/Mumbai, the commercial capital of India also happens to house most of the Film studios where Hindi films are made, along with the 'Stars' of these films. Although the city has a lot more to it than just the Bollywood connection, this is the most obvious thing one thinks of when talking about Bombay. I remember when I was shifting to Bombay, people told me that I was very lucky as I would now get to see & meet all the stars :) As if all of them were waiting just to meet me!

Coming back to the real purpose of this post, ever since the Monthly Mingle was announced, I have been thinking what should be my entry for this lovely event from Meeta at What's for lunch, honey? The theme for this month is Bollywood cooking. I thought about various dishes and dismissed them for one reason or the other. Then it struck me that nothing could be more 'Bollywood ish' than the good old Gajar ka Halwa and that too Maa ke haathon ka!

There is hardly any Hero who doesnt like it. In fact it would seem that it is one of the criteria if you want to become a hero in a bollywood potboiler(pun intended!). What? You dont like Gajar ka Halwa? Then how can you become a hero???

But just as the face of Bollywood has changed a little with time, this Gajar ka Halwa also has a 'recipe mein twist'. I have used Dates along with carrots. This has been adapted from one of the recipes of Sanjeev Kapoor, Khana Khazana. 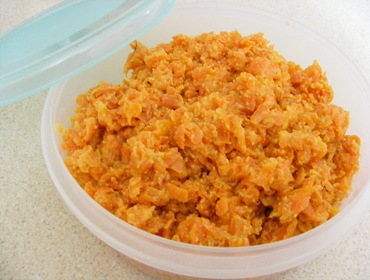 Heat the ghee in pan. Add the carrot and dates and roast them. Add the sugar and cardomom powder, mix properly and cook for sometime.
Add the nuts and the milk and cook for some more time. Now mix in the grated khoya. Stir properly and turn off the flame. Gasrnish with some more dry fruits.
This simple sounding recipe is as rich as it can be!
So 'Maa ke haath ka Gajar ka Halwa' is my entry to the Monthly Mingle 20.