Translated in English it means Stuffed -

a) Brinjal - If you are in India

b) Aubergine - If you are in UK

c) Eggplant - If you are in USA

I am really baffled by this. How can the name of a vegetable change so much in the same language(English) as you change countries?

All my life I had referred to them as Brinjals. So when I moved to London and came across 'Aubergines' I thought these might be of a different variety, maybe the long, slender ones were called that. But I found that its the same old Brinjal with a fancy new name!

Another example is the Courgette. Thats Zucchini for you in the US. I have never seen this in India at my local market, so I don't know what it is called over there. I had once bookmarked a recipe to try, which called for Zucchini. I went & searched for it everywhere, not knowing exactly how it looked. While looking for it I passed the 'Courgette' shelf more than a few times but came back home without any 'Zucchini' ! I googled for its image and thats when I found out that they were the same!

Since I have always known it as Brinjal, I will continue with the same name in this post :)

Brinjal is not a favourite with many people. Same was the case with me, but stuffed-Brinjal was always an exception. Even D, who was a chronic Brinjal hater did not mind the stuffed variety. Ofcourse he only had the 'rassa' (gravy) and never touched the Brinjal!

This recipe is considered to be a traditional Maharashtrian dish, made differently by each household. I have never had the same tasting Stuffed-Brinjal at any two places. Here I am sharing my mother's recipe.

Mix the chopped onions, tomatoes, 1/2 tsp Haldi, Goda Masala, Red Chili powder and salt to form the stuffing for the Brinjals and keep aside.

Remove the crown of the Brinjals and make cross sectional slits and keep them immersed in water to prevent discolouration.

Stuff these Brinjals with the prepared Onion-Tomato Masala. 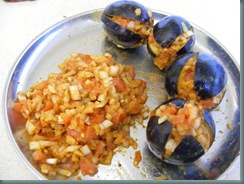 Heat oil in a kadai. Splutter the mustard seeds and add the curry leaves, hing and haldi. Put in the stuffed Brinjals and any remaining Onion-Tomato Masala and fry for sometime.

Add 1/2 cup of water or enough to cook the Brinjal. Cover and cook until the Brinjal is cooked. Sprinkle finely chopped Coriander leaves and turn off the flame. 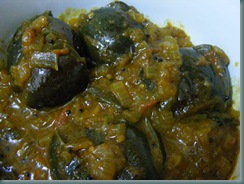 This bhaji tastes best with Bhakri but can also be had with Chapatis/Phulkas. The best way to have it is by mixing some curd with it. The cool & sour curd compliments the spicy Bhaji very well.

Another variation to this recipe includes adding roasted crushed peanuts. This adds a lovely flavour and also helps in binding the gravy together.

The Goda Masala used here is the traditional Maharashtrian Masala Powder, the recipe for the same will follow soon. In absence of this masala any other all purpose masala can be used but the taste will certainly differ.

I am sending to this to Srivalli's Curry Mela.