The making of Ghee & an award

Ghee (Clarified butter), Toop in Marathi & Tuppa in Kannada, forms an integral part of Indian food & cooking.  A traditional meal during festivals, weddings or special occasions is considered incomplete without a generous serving of ghee over rice, payasa (kheer) and a few other such dishes. Ghee even finds itself in the day to day meals in most of the households in India.

The tempering(Tadka) is taken to a whole new level when the oil in it is replaced by Ghee. Try a tempering with Ghee instead of oil for Dal fry or Kaatachi Amthi(Kattina Saaru) and you will know the difference.

Many delicacies such as Mysore Pak, Besan Laddoo, Shira(Suji Ka halwa) etc get that distinct taste only because of Ghee.

And then there are those which just can not do without a serving on ghee. Puran Poli, Moogachi Khichadi, Dal Baati, Varan-Bhat etc.

And how do you get this Ghee? Back in the villages, it is unimaginable to 'buy' ghee. It is always made at home with fresh butter which also is home made. But it is not always possible with the packet/bottled milk that we get in the cities(Mumbai in our case) barring a few brands such as Gokul. My mother in law for example always makes butter at home(in Pune) & subsequently the ghee.

To make butter, the cream floating on the milk  after boiling it, is collected for a few days till the quantity is substantial. This cream is then churned to get butter. The churning can be done manually using a ladle or a 'ravi' (used to make buttermilk/taak/chaas) or in a mixer on a medium speed setting taking care not to blend the butter in the process! The cream has to be churned till the butter separates and only water is left behind.

This butter is then heated as described later to get the ghee.

When its not possible to make butter at home, we used to get the butter from the market and then make the ghee at home. But not any butter would do. The quality & the taste of the ghee is entirely dependent on the type of the butter used. We used to go searching for the right kind of butter until we found a dairy in Dadar, which sold 'Belgaum Loni', (Belgaum is a district city in North Karnataka where my native place is located and Loni means butter in Marathi) which is the closest to the home made butter in our villages.

When I moved to London, this was the biggest difficulty I faced - getting the right kind of Ghee. Getting the ghee alone was a task in the first place. Most of the Indian stores here supply Ghee but the choice is limited to just 2-3 brands. After having tried all of them, I compromised with the one which was most readily available, since taste was not a criteria at all as they were all the same. There was a point where we were so fed up of the substandard ghee that we stopped using it in our food altogether. This did have a plus point as I did not have to worry about the calories at least from one source :) but as mentioned earlier there are times when Ghee is an absolute necessity.

So I was really happy when my friend N (staying in US) mentioned about making the ghee at home! Her idea was simple - use the unsalted butter available in the super store. I tried this a while back and it has been a regular with me since then.

I use Lurpak unsalted butter and find that not only is it very close to the Ghee being made using Belgaum Loni back home, but it also is more economical than buying readymade Ghee. I use 1 Kg of butter and that yields almost the same amount of Ghee.

Melt the butter and heat it on a medium flame. 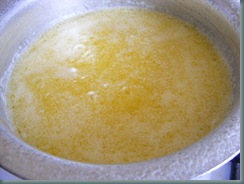 While heating the butter, some scum will be formed on the top. This has to be removed from time to time. 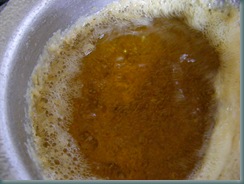 The butter has to be heated until it turns into clear yellow golden coloured Ghee. 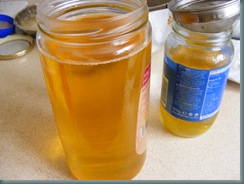 Strain and store in dry bottles.

The residue left behind is called Ghashi in kannada and I dont know of any of its use but we liked to eat it and actually fought for it!

And now for the award. Easycrafts of Simple Indian Cooking has given me the Friendship Award. Thank you so much EC.

I am passing on this award to: