On my quest to find out as many healthy & low carb recipes as possible I had stumbled upon this one on the Tarla Dalal website. Since this was not just a tomato soup & the fact that ‘spicy’ was the key word in the name of the soup, I immediately bookmarked it but had never got along to make it. But the recent enthusiasm in eating healthy & ‘trying’ to lose weight led me to dig it out of the folder and try it out for dinner on …

Those days also saw me glued to the TV whenever there was something involving a weight loss issue. Believe it or not, I stayed up late at night to see a documentary on how Claire Richards (former ‘Steps’ group member) lost an enormous amount of weight to look good for her wedding. Now that was desperation (on my part, I don't know about her!), I admit, but around the same time I also happened to catch another documentary on BBC, which listed out 10 major ‘facts’ about losing weight. There were some that I always had an idea about such as keeping track of what you eat in terms of calories, getting that regular work out done etc, but there were others that were completely new to me e.g. the connection between weight loss & our Calcium intake. The documentary also enlightened me on the real reason behind the working of low carb diets and that they are not always suitable for everyone.

The key scientific principle which forms the basis for these diets is the relationship between consumption of carbohydrates and the subsequent effect on blood sugar (i.e. blood glucose) and on production of some hormones. Blood sugar levels in the human body must be maintained in a fairly narrow range to maintain health. The two primary hormones related to regulating blood sugar levels, produced in the pancreas, are insulin, which lowers blood sugar levels (among many other effects, most of considerable significance metabolically), and glucagon, which raises blood sugar levels.……..

…..Another aspect of insulin secretion is control of ketosis; in the non-ketotic state, the human body stores dietary fat in fat cells (i.e., adipose tissue) an preferentially uses glucose as cellular fuel. By contrast, low-carbohydrate diets, or more properly, diets that are very low in nutritive carbohydrates, evoke less insulin (to cover the ingested glucose in the blood stream), leading to longer and more frequent episodes of ketosis. Some researchers suggest that this causes body fat to be eliminated from the body although this theory remains, at best, controversial, if it refers to excretion of lipids (i.e., fat and oil) and not to fat metabolism during ketosis.(Source:Wikipedia)

Another point made by the documentary was that soups are always better if you want to control your hunger & eventually the intake of food. They performed this experiment on 2 groups of people working in the same unit, putting in equal hours & doing the same job. One group was given normal lunch along with a glass of water to be had after their meal, while for the other group they simply blitzed the same lunch with that glass of water to make it into a ‘soup’. Each of these groups were observed after an interval of 1-2 hours and asked how they felt & the group that had the ‘soup’ felt fuller for a longer time.

That was enough motivation for me to try soups, otherwise for me it always meant the odd Tomato or Sweet corn soup in an Indian Restaurant or more recently Heinz Cream of Tomato Soup. So this one was a prefect transitional soup, having tomatoes but being a little different from the soups that I am used to. Whats more, its very simple to make as well. 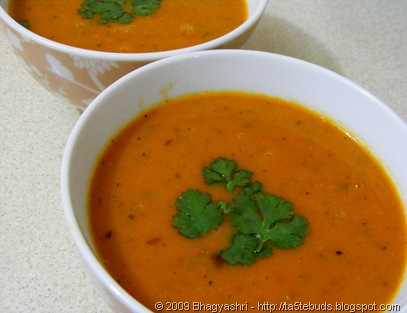 Heat the olive oil in a pan and sauté the onions & garlic till the onions turn translucent.

Add 3 cups of water, bring to a boil and then simmer till the tomatoes are completely cooked.

Blend this mixture either in a food processor or use an immersion blender and then return this to heat. 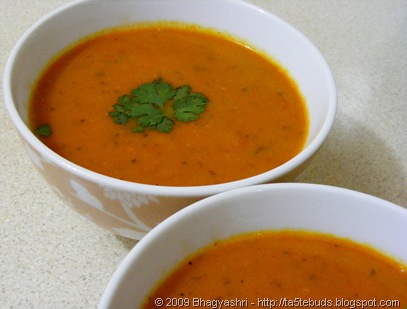 My Notes: We found that this soup was quite filling because of the Red Kidney beans and we didn't need anything else to go with it.