Gnocchi with a Tomato Basil Sauce

The little girl was circling around her mother for a long time trying to get a glimpse of what she was doing on the kitchen counter. She, the girl i.e., always liked to watch her mum working in the kitchen. giving an impression that she was trying to learn the tricks of the trade or so to speak, never mind her young age.

With all her interest in food & cooking, you would think that she must be a very easy kid to feed, but it was entirely the opposite. She was a very fussy eater and a very typical one at that. No rice, only potatoes for vegetables, moody when it came to sweets and so on. But Pasta was a different story altogether. She always liked pasta and the fact that they came in so many different shapes & sizes added to the excitement for her.


So her mother was quite confident about dinner time today since the child will have no problem with Pasta. But all that if only she would allow her to cook in peace. She chopped the tomatoes for the sauce & opened a can of chopped tomatoes as well. They all liked it to be tangy.

” I dont like tomatoes!” cried the girl. “ They are not for you, we are going to eat them.” replied her mum thinking that once the sauce was all mushy &  done, the girl will not realise that she was eating tomatoes.

She took out the basil packet from the fridge & glanced towards her attempt at a herb garden in the kitchen. The Basil was growing slowly & that made her smile and she thought that it wont be long before she would not have to buy these herbs any more. The girl had followed her glance and she got all excited at the sight of the plant. “ Look! A Beanstalk!”  “ Thats not a beanstalk, its Basil” replied her mum.

” I like Basil a lot, it tastes great!” said the girl.

“Dont just say anything to please me, do you even know what it is & where it is used?” snapped the irritated mother.

”In the Pasta, of course!” said the girl and that definitely silenced the mother. How did she know that?

She somehow managed to finish cooking and sat to feed her daughter and was taken aback when the girl refused to eat it. “ This is not Pasta, I want Pasta!” The mother realising that she had never before seen Gnocchi, tried to explain that it was a kind of pasta, only a different shape. But the girl wouldn't have it.

” But its made of Potatoes…..” She tried one last time.” Oh! Why didn't you tell me that?” said the girl and happily started gobbling up the pasta.

“Of Chalks and Chopsticks” is an event designed to let our creative juices flow and the second edition is being hosted by Sandeepa. This post will make it just in time for the event.

As for the recipe,

I am making a simple Tomato-Basil sauce for Pasta for the first time. Before this, my sauce used to have almost all the Italian spices to make it full of flavour, we being very particular about how the food should taste of something and not just the ‘seasoning’  - salt & pepper. BTW, can you even taste the finely ground black pepper if it is just sprinkled the way they show in all those cookery shows? I for one cant. It has to be loads for me!

Anyway the point here is that my Pasta sauce almost always had too many things, so when I saw this simple recipe in my favourite book, Delia’s Vegetarian Collection, I hadn't paid much attention but a few days back thought of trying it just for the sake of it. We anyway wanted a change from the usual Tomato sauce with the pasta.

The Pasta itself was different this time, Gnocchi, which is a dumpling kind of pasta generally made from potatoes. 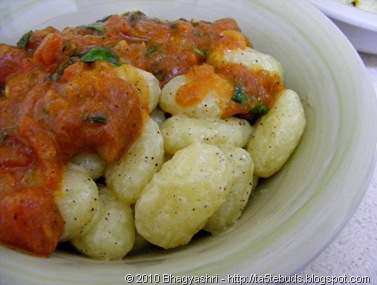 Method:
Heat the oil in a deep pan. Reserve 1 of the tomatoes & chop the rest.

Fry the chopped onion & crushed garlic in the oil until the onion turns translucent, about 4-5 minutes.

Now add the chopped tomatoes (fresh & canned) along with 1/2 of the basil leaves. Season with salt and pepper and then let it simmer for about an hour or so. This is the part that gives the sauce all its flavour & taste. You have to wait till it thickens and reaches a chutney or jam like consistency which concentrates the flavour of the Tomato.

Then roughly chop the reserved Tomato and add this along with the remaining Basil leaves. Cook for a minute and then stir in the mozzarella if using. The cheese here is not mandatory as the sauce packs enough flavour even otherwise but it does result in a creamier texture.

Simmer the sauce for another 2-3 minutes while the mozzarella melts.

While the sauce is cooking bring a pan of salted water to boil and drop the Gnocchi in it. They take only 2-3 minutes to cook & once cooked will float on to the surface. Drain them and add the butter and season with salt & pepper. Mix well until combined. 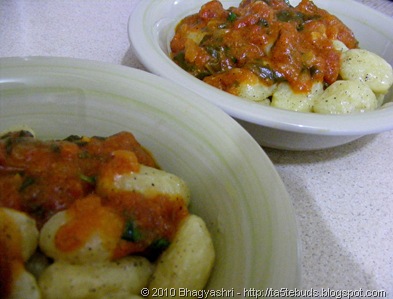 To serve, place the Gnocchi in the serving bowl and spoon over the Tomato Sauce and then sprinkle the grated Parmesan over it.

My Notes:  The slow simmering of the Tomatoes works wonders here. You have to be patient with it. In fact once it is put to simmer you can carry on with other things and only check it once in a while to stir it up. At the end it will all be worth while just for the aroma it lets out!