This one has been lying in the drafts for a very long time. Probably because it has potato in it. Every time I looked at it, I would think that this can wait because its only about potato, nothing special. Some times the potato vegetable itself is taken for granted like this.

It is the one thing that most of us always have in the kitchen. I have hardly met any one who doesn't like potatoes, except maybe my friend AG, but I am hoping she will change her mind, once she tries this recipe :) A lot of people don't like Brinjal or Bittergourd or pumpkin or Okra and so on, but potato is always the favoured one. In spite of all this, Potato is almost never given the centre stage. It is generally paired with something like Methi (Fenugreek), Matar (peas), Gobhi (Cauliflower) etc. If there are guests coming in at my place, Potato is made to act like a 'Buffer'. A paneer speciality and a potato bhaji to accompany it.

Potatoes contain a number of important vitamins and minerals such as Vit C, Potassium & Vit B6. Moreover, the fiber content of a potato with skin (2 grams) equals that of many whole grain breads, pastas, and cereals. (Source: Wikipedia)

Of course the nutrition value depends a lot on the way it is cooked and the way you would want to cook depends on the type of potatoes you have. Some of the well known varieties I get here in London include Desiree, King Edward, Charlotte, White potatoes, Maris Piper etc. Some of these are suitable for boiling & mashing while some are ideal for roasting & frying.

My current favourite is the Maris Piper. I find that it is perfectly suitable for Indian style cooking including boiling and mashing. I had tried some other varieties earlier and had a difficult time mashing them for Aloo Paranthas etc. If I opted for a mashing type of Potato, it wouldn't be very good for making Bhajis (dry & gravy). But I seem to have struck a perfect balance with Maris Piper. It gives a lovely grainy texture when boiled & mashed & doesn't get sticky and also cooks very quickly when made in to a Bhaji (curry).

As I have mentioned earlier, we can survive on Potatoes any number of days. And sometimes I love to celebrate Potato just the way it is without anything else to overpower the starchy tuber. One of the favourite ways to make it is this Ras Bhaji.

Heat the oil in a Kadai/Pan. Splutter the mustard & cumin seeds. Add the curry leaves, Hing and Haldi.

Add the sliced onion & saute till the onions turn translucent. Add the potatoes & chopped tomato and mix. Cook for 5 min with a cover on.

Goda Masala, also called the Black Masala, is the traditional Maharashtrian spice mix used for Bhaji, Amthi etc. In the absence of this Masala any other curry masala can be used but the taste will be a little different.

Add about 2 cups of water and bring to a boil. Then, let the bhaji cook on a slow flame without cover.

After about 10-15 min, check if the potatoes are done and switch off the flame. We wouldn't want the water in the Bhaji to get over since this is a Ras (Gravy) Bhaji.

Add chopped coriander leaves and a dash of lime juice just before serving. 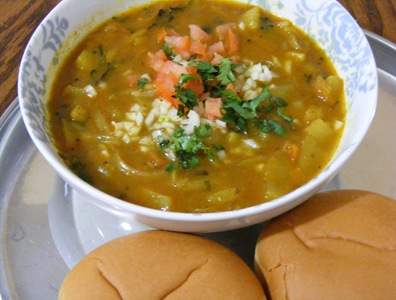 This can be had with rotis or Chapatis but its ideal with Pav, bun or even Bread slices. Add some chopped onions & sev for that extra crunch and enjoy!