Even before I had seen the MBP announcement, I had bookmarked these Masala Peanuts. No oil, they say and that was all the encouragement I needed to make them. If only I had got some prodding to publish this post earlier. Its been more than a fortnight since I made them & only posting about it now.

Anyway, the recipe looked quite simple & straight forward. I have used the pink skin Indian variety of peanuts which does not find much favour at Jugalbandi as you will find out in their post. But for me, these are the best, they taste great & these are what I stock. Plus I have always had the Masala peanuts (the fried ones) made with these. That reminds me to mention here that this version is as healthy as it can get as opposed to the fried Masala peanuts that we used to get on the roadside stalls (or in the local trains), spicy & oily, but they did taste great too! BTW those fried ones are now available in fancy packages under the brand name of Haldirams (can some one confirm this?). Check out their cool site.

I have used a different spice combination than given in the original recipe. 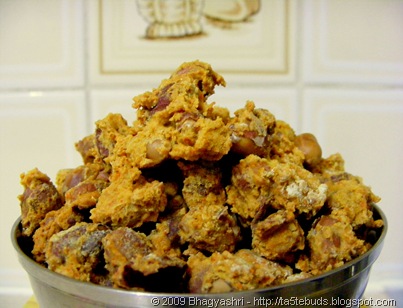 Arrange the Peanuts on a baking tray and bake them with the broiler on for about 10-15 min, stirring them around 2-3 times. Keep a watch as the peanuts might get burnt and don't expect dark speckles on them as you would get when you roast them on the stove top. Here they will be heated uniformly so they will only turn brown. Remove and keep aside to cool. Meanwhile mix the the rest of the ingredients in a bowl. Reserve half of this dry mixture and make a thick paste with the other half using a little water.

Add the paste to the peanuts and mix well to coat them. Now add the dry mixture to this and combine. I found that using a spoon works better than doing it with hands since the flour sticks to the hand.

Spread the coated peanuts on the baking tray and bake for 15 min.

Take out the tray after 15 min and move around the peanuts. Now would also be a good time to break the bigger clusters if any, into smaller ones.

Put the tray back in the oven and bake for 10 more minutes. Take them out and allow to cool. Once cool enough, store in dry air tight container. They are great to munch on and really do get over in no time.

This is my entry for this month’s MBP: Snacks & Savouries hosted at Ashwini’s Spicy Cuisine. MBP is an event originated by Coffee of Spice Cafe.