This wasn't my first attempt. I have made Rasam before but not with such a delicious end result. Although rasam forms an integral part of a south Indian meal, I have yet to come to terms with this watery preparation.

I have always wondered about how it can be described. Its not like Sambhar for sure, not even a Dal, because you can hardly find dal(lentils) in there. They call it a South Indian soup but if you are used to the restaurant style Tomato soup & Sweet corn soup then this seems like something different. I had even asked my friend S, how & with what do you eat rasam. Rice, she said. And I could not imagine mixing my rice with this watery (again the same adjective!) soup kind of thing, me being used to thick Dals, varan, amthi & sambhar. But I did have it with rice at her place and liked it a lot. That was my first encounter with the Rasam.

When I started cooking on my own after marriage I tried a few times to make Rasam, mostly with tomatoes. It would turn out fine sometimes & ‘only’ watery at others. Such experiences wiped out the lovely rasam memories from S’s place & reaffirmed my belief of the Rasam being ‘Watery’! Then T&T – Tasty Palettes was announced and while browsing through Suganya’s blog I came across this title – Pepper, Cumin & Garlic Rasam with Potato roast.

Now if you mention, pepper & garlic in the same breath, you have my total attention. Plus it had cumin too and of course the picture looked great as is the case with all the pics on Tasty Palettes. I had to try this one specially since it fitted perfectly with the fact that there was only rice for dinner. 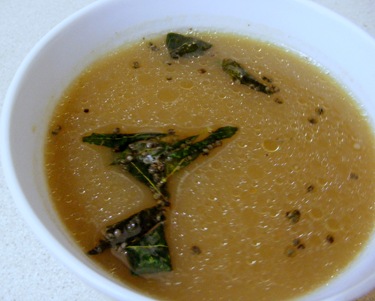 I followed the recipe from start to end & obediently did not allow the rasam to boil as Suganya has mentioned. I also took the ghee recommendation very seriously and that is clearly visible in the picture isn't it?

In fact I was so engrossed in the whole thing that I even made the Potato roast, mentioned in the same post on the blog, without having planned it! The tangy, spicy Rasam had great company in the form of crunchy, crispy potatoes. But since that wasn't the original plan it didn't strike me to take snaps & I only remembered when we had finished off everything (licked the rasam bowl & scraped the potato off the pan)! 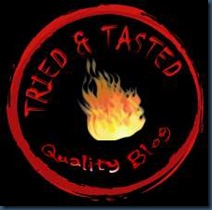 This goes to Zlamushka’s Tried & Tasted event that has made a comeback with Suganya’s Tasty Palettes being the featured blog for the month. The event is being hosted by Sweatha, Curry Leaf.