While this is not the first time I have come across them, I knew them by a different name – Tengul. I got introduced to them at my friend N’s place and had found them very different from the ‘Chakali’ that we prepare at home specially for the Diwali Faral.

This month’s ICC has brought back all those memories and I was actually visualising Manni’s kitchen, while I fried these Muruku. The recipe itself was simple enough and very quick to prepare. Of course, quick because I took a shortcut and used readymade rice flour instead of soaking, drying & grinding the rice myself. Apart from this I also reduced the quantity to make only a few because currently we are trying to cut down on fried & fatty foods.

As is the case sometimes with new recipes, I did have a minor setback because the first lot that I had put in the chakali maker yielded in bits & pieces of Muruku, instead of shapely ones. So I made them out into ‘Sev’ instead. I then realised that it was because the dough was a bit tough. A few drops of water solved the problem and I finally got the Chakali shaped Muruku. 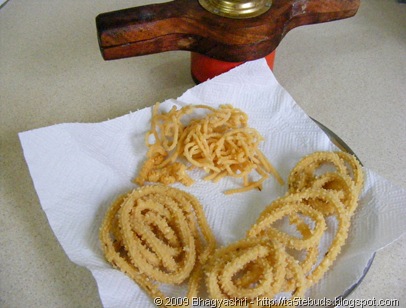 Makes about 6-7 proper Chakali shapes, similar to the ones in the pic!

Roast the Urad Dal till it turns a light brown. Allow to cool down and then grind into a fine powder.

Mix the Rice flour, above ground urad dal, salt, cumin seeds & sesame seeds in a bowl. Add the cold butter and mix with your hand to get breadcrumb like consistency.

Now dissolve the hing in a little water & add it to the above mixture. Add some more water to get a firm but soft dough.

Prepare the Chakali maker by oiling it well. Fill this with the dough and then press out through the chakali ‘blade’ and shape them into spiral chakalis directly in to the hot oil for frying. Or as Srivalli mentions in the original recipe, you can also make out the shapes on a plastic sheet & then slide them in the oil.

Fry them on a medium heat till they are just turning brown, drain on a kitchen towel. Once they are completely cooled, store them into air tight containers. 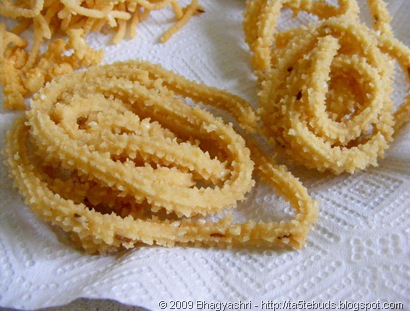 My Notes: The Muruku tasted exactly as I remembered the Tengul but with slightly less crunch. They were not as crispy as I would have liked them to be. Maybe it was the extra water I had added but Then otherwise I wasn't getting the Murukus to shape at all. I guess its a balance that I might achieve only with practice!

And speaking of practice, I think this was a good one, before I embark on making Chakali for the Diwali Faral. I was a little apprehensive of attempting it for the first time on the occasion itself, having brought the Chakali maker on my last visit to India. But muruku making has given me a little confidence to handle the gadget better when I make Chakali for Diwali!

So watch this space for Chakali & hopefully some other Faral items soon!