Finding this month’s book in my local library proved to be some thing of a task for me. Finally I managed to get the book called for me from another library.

The book chosen for this month was Ladies Coupe by Anita Nair. There are essentially 6 stories, involving – of course 6 women, tied together by the central story of Akhila, who is a single woman at 45 yrs, having worked hard to keep her family (mother, 2 brothers & a sister) afloat after the sudden demise of her father. She is trying to find the answer to the question – does a woman need a man to cope with life? The other 5 women, her co travelers in the train to Kanyakumari, try to help her arrive at the answer by sharing their own life story with her.

The first thing that struck me about the writing was the extensive use of adjectives & similes, specially in the initial chapters. Although the vivid description of a railway station & platform left me feeling nostalgic, as if I was standing on that very platform, some times I felt she had delved into too much of a detail, which took away the spotlight from the story.

The story itself did not work for me either. I could not identify or even empathise with any of the characters. Their discontent towards life sounded hollow to me, except may be for Akhila & Mari. Even in the case of Akhila, there were some aspects which were beyond my understanding. It might be that I couldn't really appreciate the position she was in, but that is where I thought the writer had failed to make me feel for Akhila. For example, I saw no reason for her to put up with her opportunist & ungrateful sister while she pretended to be the one making sacrifices!

As for the food part, I did not find too many culinary references and being the serious kind of book that it was, no dish sprung to mind immediately. But there was the mention of Kathrikai Bhaji, which caught my attention and so that is what I made. 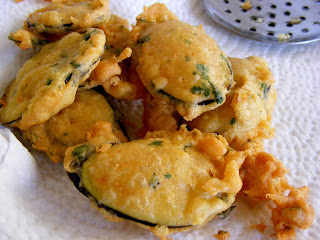 Serves 2 as a side

Combine all ingredients except for the aubergine slices and oil in a mixing bowl. Prepare a medium thick batter (slightly thinner than Dosa batter) using a little water.

Heat the oil and then lower the flame.

Dip the slices of aubergine into the prepared batter and fry in the hot oil turning them every now & then. Remove them out of the oil when they turn light brown and are crisp. Drain on a kitchen towel.

Serve hot on their own as a perfect evening snack with Tea/Coffee or as a side with the meal.

My Notes: This was the first time I has included chopped onions in the batter for the fritters, only because they were mentioned in the book. I thought they might add an extra crunch but there was no real difference, so its perfectly OK to skip them.

On another note, hope all of you had a lovely Christmas and are looking forward to the New Year!