Kadhi is a curd based preparation generally made as an accompaniment for Rice dishes such as Pulao, Khichdi or even plain steamed rice. A Kadhi has two components namely the curd based gravy and the additional component which enhances the taste by imparting its own flavour. The famous Punjabi Kadhi has gramflour dumplings called Pakodi while down south it is called Mor Kolumbu and the Pakodi is replaced by a variety of vegetables such as White Pumpkin, Radish, Okra, Snake gourd etc.

The Kadhi that we prepare, can be considered as being the intermediate between the North and the South. While it does not have Pakodi in it, it is sometimes made with vegetables and sometimes had plain, without anything added to it and called Palade in kannada. The most common vegetable used is the Snake gourd.

Although it would seem that the taste of the curd will not change too much with the added component, in reality the taste changes drastically with each of these additions.

Here I am presenting a Palak (Spinach) based Kadhi, the recipe for which was tweaked from the Bawarchi website and was recommended by dear N!

Whisk together the curd, water, salt and Besan to form a mixture without any lumps and keep aside.

Heat oil in a deep vessel and splutter the mustard seeds and cumin seeds. Add the garlic, Asafoetida, dry red chillies, Haldi one by one and fry for a min or two.

Add the chopped spinach leaves and saute for about 3-4 min.

Add in the curd mixture and mix properly. Heat on medium.

Once the Kadhi starts to boil, stir and switch off the flame after 2-3 min. It has to be boiled only to let the Besan be cooked. If boiled for a longer time, the curd starts getting separated. 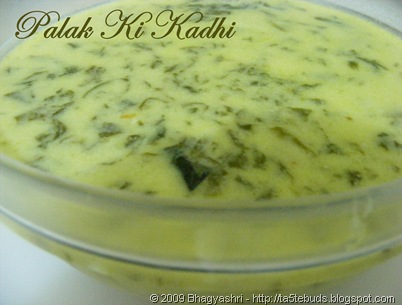 To enjoy it to the fullest serve hot with plain Rice and some roasted Papad!

This Kadhi is on its way to Tongue Ticklers for the FIC-Yellow event. Looks like there's really going to be a lot of sunshine this month!

Labels: besan, Other than veggies, Spinach