“It has to go on the blog this time at any cost!” She thought. She had made them a lot of times before this, but somehow never went around to publish it on her blog. The excuse being the classic one – lack of good photographs. But today she was going to make sure she had snaps, in fact she was going a step further & taking step by step pictures. These were always a hit on the blog.

She switched on the oven to pre heat & just as she started to sieve the flour Rohan, her 4 year old son, came running in the kitchen.

”What are you doing mum? Can I have some chocolates now, pleaaase!” he said.

“No, its almost lunch time for you, so no snacks now. And please go & play with your toys & stop disturbing me for some time.” She said yanking off the strap of the camera from his hands.  She somehow managed to take a snap of the butter – sugar mixture.

She called out to Vikram to take care of Rohan till she baked the cookies. Lunch was all ready and waiting so she could finally concentrate on the cookies or rather the photographing procedure.

She prepared the dough, made out the small balls and arranged them on the lined cookie sheet. They went in to the oven to be baked and she turned her attention towards her son.  It was unusually silent in the living room she thought.

When she peered in,  Vikram was engrossed in the newspaper and Rohan was fidgeting with the laptop. She somehow got him to let go of the computer and sat with him to read his favourite book just as the oven sounded to tell her that the cookies were ready.

Rohan heard the sound too and was all excited about having his favourite cookies but was promptly warned off that they were too hot to eat yet and anyway he had to have his lunch first, “And I have to get the snaps.” thought Shobha.

Shobha arranged the cookies on the mesh to cool down and started getting the lunch. She could take the final photos after lunch, once the cookies were completely cooled down. She carried the food to the table and started arranging everything as Vikram came in and sat. She called out to Rohan but there was no answer. She went looking for him for the umpteenth time in the day. There was no sign of him anywhere and she even looked in the bathroom. When she didn't find him even there, she started to panic. Where can he be?

Vikram joined in the search too and he discovered that the door to the garden in the back was left open. He rushed out to see if Rohan was in the garden and Shobha ran out too, but they couldnt find him. She suddenly realised why she was so against getting a ground floor house with a garden at the back and easy access to the road from there. She somehow felt that Rohan must have come out to play and then wandered off. The thought made her cry and she started sobbing uncontrollably.

”Are you crying because I finished off all your cookies, mum or that I made a mess in the store room?” Asked an innocent voice. Shobha and Vikram turned around to find Rohan munching on the last Peanut Butter Cookie that Shobha had made and was yet to photograph.


Wondering what this is all about? Check out a brand new event, Of Chalks and Chopsticks, hosted by Aquadaze. I am hoping to revive my supposed writing skills through this event. Thanks a lot for thinking of this Sra, Sandeepa & of course Aquadaze! 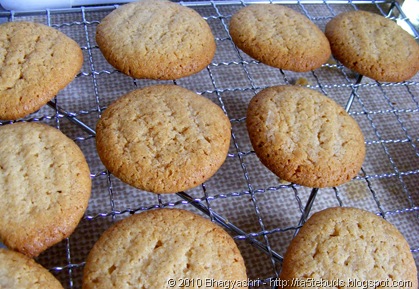 Method:
Sift the flour, baking powder, baking soda and the salt together and keep aside.

Combine together the butter, both the sugars, peanut butter, egg and vanilla essence in a mixing bowl. Beat them until well blended.

Add the flour mixture and mix until combined.  Cover and refrigerate for about 2 hours for the dough to get firm.

Pre heat the oven to 180 deg C. Grease 2 baking sheets or line them with baking paper.

Shape the dough into 1 inch balls and place them 2 inches apart on the baking sheet. You can dampen your hands while doing this so that the dough doesn't stick. Dip a fork in flour and then press lightly on each ball to flatten it slightly. Bake for about 12-15 minutes until the they start to brown.

Let the cookies cool on the pan for sometime and then transfer them to a wire rack to cool completely.


My Notes: The cookies are deliciously crunchy and if you are someone who doesn't like peanut butter too much, these cookies might convert you. The original recipe also decorates these cookies with streaks of melted chocolate. To do this, let the cookies cool down completely. And then melt some chocolate in a microwave or in a double boiler, fill it in a piping bag and then fill in the alternate grooves made by the fork on the cookies. I skipped this step since the cookies were perfect on their own.