This month’s read for the Book Club was Sophie Kinsella’s Can you Keep a secret? While I am not particularly a fan of this genre of books called the chic-lit (I am more of a mystery, thriller, espionage reader), I was intrigued when I had read about this book. Her earlier Shopaholic series had gone by, with me barely knowing about them.

I knew what to expect when  I started reading this book. Nothing heavy just plain entertainment. I was glued to it till I finished it. It is about Emma Corrigan who is a normal ‘nothing-special’ kind of a girl who like any one else has some secrets. Nothing in the league of CIA, MI5 or any other world changing issues but simple facts about herself that she has hidden from the people in her life. Her boyfriend doesn't know that she is a size 12 instead of 8. Her friend from the office doesn't know that she hates crochet. Her flat mate doesn't know that she borrows her clothes when she is not around. Her office colleague doesn't know that she pours orange juice on her plant everytime she is irritated and so on. And then one day she spills out all these tidbits to a complete stranger and the story is all about how that changes her life completely in all aspects. For the better in many ways, but not before she goes through the usual nail biting, tense moments about what will happen and how she will cope.

The stranger turns out to be her top boss and this leads to a lot of hilarious  & embarrassing situations for Emma. The biggest one being when all her secrets are revealed on the TV accidently by Jack Harper. But it turns out that he has his own vital secret too!

I couldnt help but think of Bridget Jones while reading this book, specially in the initial chapters when nothing is going right for Emma!
It was quite an enjoyable book and a good change from the ‘serious’ stuff that I am used to reading most of the times.

Scotland was a central part of the story – Emma is returning from Scotland when she tells all her secrets on the plane, Jack Harper’s secret involves the city of Glasgow in Scotland etc. So I made these Scotch Shortbread triangles.

But there is a secret about this too! When I tried to make them the first time some time last week, I failed miserably. I don't know how I made a mistake but the end result was too crumbly and wouldn't hold shape at all, although it tasted great. But I made them again 3 days back & this time they turned out very good. Not perfect yet but I will keep working on that. 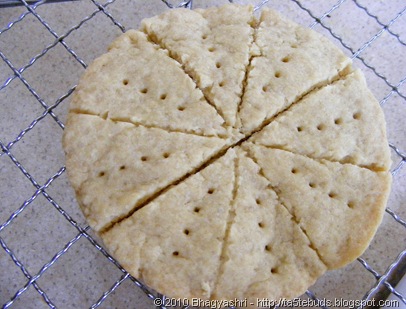 In a mixing bowl, sift the flour, sugar and salt together.

Add the cold butter to this and mix with your fingertips till the mixture looks like bread crumbs.

Now bring together the mixture to form a soft dough. Press this dough lightly into the pan with your fingertips.

Using a sharp, thin knife mark the dough into 8 equal portions and prick with a fork all over. Sprinkle some sugar on this and then bake in the pre heated oven for about 50 min or until the edges start to brown up.

Remove from the oven and cut along the markings to give you 8 shortbread triangles. Let them cool in the pan for sometime and then later transfer them to a wire rack to cool completely. 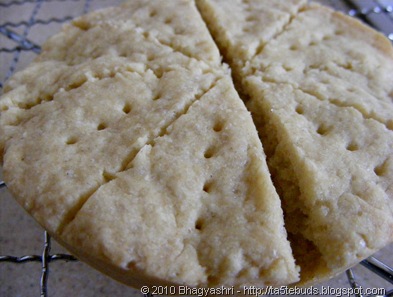 As I have mentioned, my second attempt was far better than the first one but I still feel it could have been better. After I had mixed the butter in the flour it was still a little dry and I could not make a dough out of it. So I had to add a few drops of Milk to it.

The shortbreads were delicious but the texture could be better so thats what I will be aiming for next time.