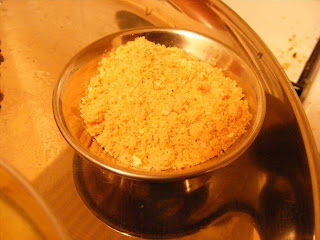 Having Belgaum, which lies almost on the border of Karnataka & Maharashtra, as your native place has its own advantages. Apart from knowing 2 languages Kannada & Marathi, I also had the benefit of being exposed to a cuisine which is neither 100% Maharashtrian nor 100% South Indian but a delicious mixture of both. So while Puran Poli featured regularly in our home during festivals like Holi or other special occasions, we also had Idli, Dosa & Wadas very often. The same has continued with me since I took over my Kitchen. In fact my cooking also has a bit of a North Indian touch which is a result of a long 12 year stay in Delhi, but more of that some other time.
Pudi means powder in Kannada. You will probably find this dry chutney only in households where a similar kind of cuisine is followed. The Maharashtrians generally make a more fiery garlic chutney with maybe only peanuts in it. But this one also has roasted Chana Dal, called Puthani in Kannada, which gives it a distinct taste. You will find it in the stores in India by the name of 'Bhuna Hua Chana Dal' & here in London its called 'Dalia' (This I think is the Gujarati name, considering that you will find most of the grocery items suited to Gujarati cooking in London). Garlic still remains the main flavour though.
Ingredients
1 cup of Peanuts (The pink skinned ones are preferable)
1.5 cups of Roasted Chana Dal (Split Chick Pea)
5-6 cloves of Garlic
3-4 tsp Chili powder
1/2 tsp Sugar
1-2 tsp Salt (according to taste)
The proportion of peanuts & Roasted Chana Dal is to be maintained at 1:1.5 and the other ingredients can be adjusted accordingly.
Roast the peanuts & allow them to cool. Now remove the skin by rubbing them between your palms. 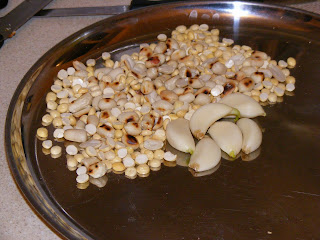 Grind together these peanuts & all other ingredients making sure that the grinder is completely dry. It has to be a course powder & not very fine.
Store in an air tight container. This chutney stays good for a long time so it can be made in large quantities & stored. It tastes very nice when mixed with curd & is a good accompaniment with rice as well as rotis/chapatis. This can also be sprinkled on Sandwiches to give them a different taste or just on plain bread & butter.
This is my entry to JFI-Garlic hosted by Mathy of Virundhu.
Posted by Bhagyashri at 09:06