Monthly Blog Patrol is an event started by Coffee of The Spice Cafe, being hosted by Pavani of Cook's Hideout this month, the theme being One Pot Wonders. I feel that this is a great way of appreciating each other's works and getting to know what each one is cooking!
I didn't have to search at all for this. I had come across this recipe for Cauliflower Biryani when I was going through Maheswari's Beyond the Usual even before the MBP-One pot meal was announced. I had liked the simplicity of the recipe & knew that this one would turn out great.
Both of us(Me & GM) are not Rice fans, so whenever we do have it, its usually in the form of Pulao/fried rice/ biryani etc. So I am always searching for different rice recipes. When I saw this one on Maheswari's blog I had already bookmarked it to try it out. And when MBP was announced I immediately turned to this one.
I followed the exact recipe barring just one change. I added some Garam Masala just before putting on the lid of the Pressure Cooker. 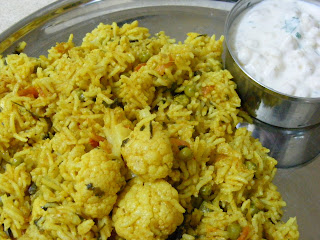 This was the simplest Biryani recipe I have ever come across but finger licking delicious all the same. As suggested, I served it with some Boondi Raita. Cauliflower Biryani will now be a regular part of our meals whenever we are in the mood for some rice. Thanks a lot Maheswari for sharing this recipe. There are many more recipes on her blog that I am definitely going to try very soon.
Posted by Bhagyashri at 19:10