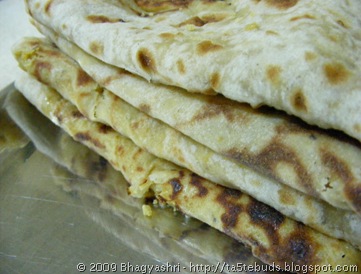 To complete the Puran (sweet filling made of split chickpea) trilogy, I am now presenting the most famous of the lot - Puran Poli or Holige as it is called in kannada. Although it needs no introduction, if I had to describe it to some one who hadn't heard of it, I would say that it is like a Parantha (stuffed flatbread) with a sweet stuffing. It is the ultimate festive dish, almost always made during Holi and also features as a favourite on any other special occasion.

Making Puran Poli is considered to be difficult for the basic reason that if all the proportions and the timing is not taken care of, they can turn into real disasters. In fact, it is said in our part of the country that if some one can make good Puran Poli and Jawar Bhaakri (Flatbread made from Sorghum) then the person is a complete cook!

I have started to make Puran Poli only after I came to London after marriage. I have had my share of disasters during the initial attempts but after a lot of trials & errors, I would like to believe that I have reached at a personal formula for making very good Puran Poli.

The most important part is of course making good Puran, having the right consistency and perfect sweetness, not too much and not less either. It has to be soft yet firm for it to be rolled out between the dough.

Here I would like to add that the significance of Puran is not only limited to these delicacies but it also takes part in the actual pooja in the form of Aarti. Puranachi Aarti or Hurnadda Aarti is performed by making small diya shapes, out of the above prepared Puran. Batti/Vaath (wicks) soaked in pure ghee (clarified butter) are placed in these and lighted to form the Aarti. Once the Aarti is completed, this Puran is distributed as Prasad. The taste of this Puran prasad can only be described as divine because it is totally different from the normal puran because of the presence of the  burning wick on it.

For the filling (Puran)

Pressure cook the dal . Drain and mash it very finely.

Put the dal to heat in a kadai. Add the grated Jaggery, cardamom powder and nutmeg and mix.

Continue to heat until all the water has dried and a homogenous mixture is obtained. Take care that the puran does not dry out completely otherwise it will be very difficult to roll it out. Make small balls of this puran, each one having about 1 1/2 tblsp of the puran.

Put a Tawa (griddle) to heat and divide the dough into equal large lemon sized balls. Roll out to Poori size and fill it with the puran and seal it from all sides just like that for a stuffed Parantha.

Place on a floured surface and carefully roll out into 2-3 cm thick Poli(roti/flatbread). 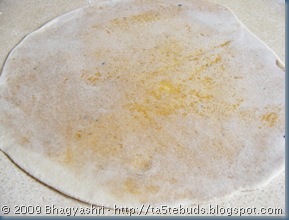 Place this on the heated tawa. Cook till small bubbles start appearing, at this point flip the puran poli and let it cook on the other side. Drizzle some oil/ghee on the sides and take care not to tear the Puran Poli while flipping it. Cook well on both sides till brown spots/freckles appear and then remove. 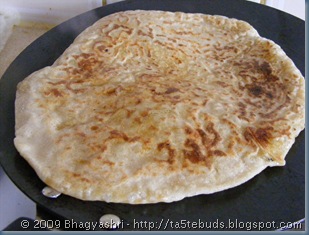 The most ideal way to have Puran Poli is with lots of Toop/Tuppa (Ghee) and some milk. In fact I have been told of functions & marriages where Puran Poli was served with bowls full of both Ghee & Milk! Although the amount of Ghee has considerably reduced since those times, the milk still holds good.

My favourite way to have Puran Poli is with just a tsp of Ghee,  a bowl full of Katachi Amthi / Kattina Saaru (recipe coming soon) and some coconut chutney on the side. Yes, I do have weird taste (read food combinations) when it comes to certain food items :) Go ahead and try this combination & let me know what you think!