Sunday evening, when we were in the midst of deciding what to make for dinner or whether to just dial in a pizza, our family friends here in London called & informed us that they were coming over in another 10 minutes. What followed was a mad frenzy to make the house look like there were civilised people staying in here! It is almost always like that on weekends, since there is no pressure of getting things done on time, most of the time they don't get done at all!

Anyway, we somehow barely managed for the house & the family to be in a presentable state and they arrived, along with a basket full of goodies for the occasion of Lohri, which was yesterday. Lohri is a festival of bonfire which is celebrated in the northern part of India. This festival has its counterpart in almost all the regions- Pongal in the south, Sankranti in the west and so on. It marks the beginning of Uttarayan (when the earth starts moving towards the sun). It also signifies the starting of the Harvest season, a period of rest before the harvesting actually begins. Read more about it here.

Coming back to the basket full of goodies, apart from a box of sweets it had Revadi (A candy like preparation of sesame & sugar with a slight rose flavour)  and groundnuts in the shell. 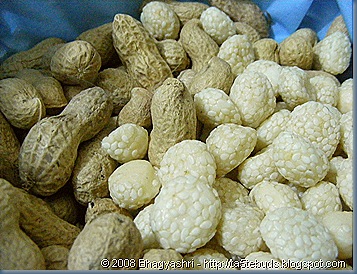 The first Revadi that went into my mouth took me straight into the open ground of Lodhi Road Complex in Delhi, which is where the bonfire used to be every year for Lohri. Sweets made from Sesame are exchanged on the occasion of Lohri, since it is celebrated during winter and sesame is considered to be a "heaty" substance. The groundnut denotes the harvest of the season.

Makar Sankranti, which is what we call this festival is celebrated in almost the same way and on the 14th of January, a day after Lohri. 13th January is celebrated as Bhogi, but more about this in another post. On the occasion of Sankranti, sweets made from Til (Sesame) & Gul (Jaggery) are exchanged with a chant of "Til Gul ghya gode gode bola" in Marathi & "Yellu (Sesame) Bella (Jaggery) tagondu Yellu  Bellada haage irona" in Kannada, both of which basically mean "Let our relationship be as sweet as this combination of Sesame & Jaggery".

The name Makar Sankranti, where Sankranti means transition in Sanskrit, is derived from the fact that on this day the sun begins the transition from Dhanu Rashi (Sagittarius Zodiac) to Makar Rashi (Capricorn Zodiac). The festival holds special significance for new born babies and newly wed ladies and they are gifted black clothes with white designs and ornaments made of halwa (sugar), another sweet specially made for the occasion.

As with all other festivals, food again plays a very vital role during Sankranti also. As I have mentioned earlier, sweets made from Sesame & Jaggery are a must and this is what this post will cover. Apart from this, on the day of Bhogi (13th Jan), the spread usually consists of Bhogi (a spicy khichdi), Shejji Bhaakri (Flatbread made from millet) and accompaniments such as Lassun Chutney, curd, Brinjal bhaji etc. But for now I am presenting the recipe for Til-Shenga-Gul Ladoo (Ladoos made form Sesame, groundnut & Jaggery)

Method: Roast the Til lightly, taking care not to burn it. Allow this to cool down. 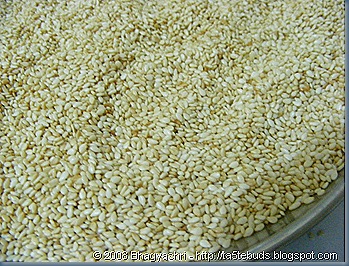 Roast the groundnuts separately till you see dark specks on the skin. Allow to cool & then remove the skin by rubbing between your palms.

Reserve 2/3 tblsp of Til and Coarsely grind the remaining Til & Groundnut separately. Mix both of them along with the grated Jaggery and also the ghee. The ghee is added to aid in the Ladoo making process.

The mixing process takes a fairly long time. This is because the Jaggery has a tendency to form lumps and this has to be mixed properly by rubbing between the fingers to separate it out and form a uniform mixture. This is very similar to mixing cold butter with plain flour that we do for the cookies, crusts, puff pastry  etc. Also add the reserved Til now and mix.

If the mixture seems too dry for making Ladoos, add some more ghee, but this will alter the taste. Alternatively, warm the mixture a bit. This will make the Jaggery melt a little and it will be easier to make the Ladoos. Prepare small lemon sized Ladoos from the mix by continuously pressing the mix between your fingers. The pressing action will release the "oil" from the Til & groundnut which will help in holding the Ladoo together. 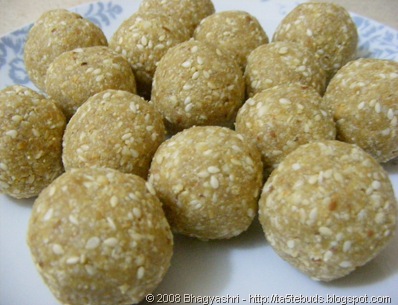 Do not store, distribute among friends & relatives with the above mentioned in whichever language you are comfortable!

Wishing everyone a very Happy Makar Sankranti! Let our friendship continue to be as sweet as it has been and more!