I don't know why but I remembered Saeed Jaffrey's 'Tandoori Nights' when I sat down to write this post. For those who don't know or dont remember, Tandoori Nights was a serial that was telecast on Doordarshan at least 15 years back (don't remember the exact period), when I was in school. This serial, originally from BBC, was based in London and revolved around Saeed Jaffrey's character who ran an Indian Restaurant in London.

One reason could be that the serial was based in London and I have not seen any other people other than Londoners so fond of the Tikka masala. Of course there preference is the Chicken Tikka, but since I am a vegetarian, Paneer Tikka finds a place in our home & our menu whenever we are at an Indian Restaurant. I didn't have an idea how popular this is with the British here until I was speaking to this gentleman, who happened be GM's manager's brother. The minute we told him that we were from India he went " Aaah India! Goa! Taj Mahal! Elephants! Chicken Tikka!!! Incidentally are these the only things that India has to boast of?

Another reason could be the association with 'Tandoor' which is where the Naans are traditionally made. And Paneer Tikka Masala tastes best with these Naans. Incidentally the Tandoor also reminds me of 'Sanjha Chulha' a serial which used to be telecast on Doorarshan long back. Didn't we see a very young looking Shahrukh Khan in it? Apart from his 'Fauji' of course. And why am I getting so nostalgic about old Doordarshan serials all of a sudden!

But getting back to the real topic I also remember that when I was old enough to understand menu cards and had come across this dish, I thought that this must be Paneer Tikha (Hot & Spicy) Masala and the colour of the gravy served like a confirmation. It was only much later that I came to know about the 'Tikka' and have been a fan of this dish since then. In restaurants they use Tandoori colour which gives the Paneer as well the gravy that orangeish kind of red colour.


Ingredients
For the Paneer tikkas

For the Paneer Tikka: Mix together all the spices & ginger-garlic paste with the curd and add the paneer pieces & the diced vegetables to coat them well. Keep aside for at least an hour.

Heat oil in a pan and shallow fry the paneer pieces until they turn golden brown. Alternatively this can also be done in the oven by roasting the paneer at 200 deg C for approx 20 min. The oven option is obviously a healthier one. Repeat with the onion, tomato & capsicum without cooking them too much.

For the Gravy: Grind the onions to a paste. Grind together the khuskhus & cashewnuts and make a paste. Blanch the tomatoes and puree them. Mix all the spice powders except for the kasuri methi with a little water to make a paste. This is done so that the spices dont get burned when added to the heated oil.

While the preparations might sound quite elaborate, the end result is worth every effort, trust me :)

Heat oil in a pan. Add the sugar and stir. The sugar will slowly caramelise and the oil will get a rich golden brown colour. At this point add the cloves, cinnamon and cardamom and fry them till you get a nice aroma.

Add the onion paste and fry well. Add the masala paste and mix well and fry for a minute. Then put in the Cashew-Poppy paste and fry.

Add the kasuri methi and then the tomato puree and cook till the gravy gets a little dry & oil starts separating from the sides.

Add the Paneer Tikka, onion, tomato, capsicum and salt and mix well. Cook for 5 more minutes and then add the cream and turn off the flame. If you want a thinner gravy add more cream but not water. 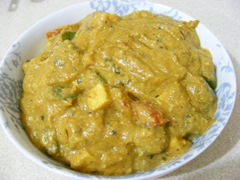 As mentioned earlier, this pairs best with Tandoori Naans. In their absence, serve it with rotis/phulkas/parathas.

Pooja of My Creative Ideas is hosting an event, Theme of Week, on the occasion of Independence Day, where the entries have to relate to the Indian Tri Colour. I happened to click the diced veggies which I am sending to this event. 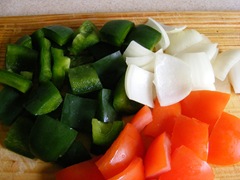 What an irony! I am celebrating the Indian Independence with a post about an Indian Dish, most popular among the British, from whom we got the Independence in the first place! :)